“The plethora of historical regional and local data that the Signature’s exploration team is working through, continues to yield exceptional and valuable results.  This data is highly important when combined with the new geophysical survey data sets, in the identification and verification of significant gold mineralization strike extensions and entirely new zone drill targets. The data implies that the existing gold zones that contain the 234,000 ounce historical high-grade gold resource* could be vastly expanded.  Test drilling will commence at these new target areas around mid-November once the depth extension drilling is complete”.

Geophysical interpretation of the recently-completed detailed ground magnetic survey has extended the North and Central zones eastward past the Mud Lake fault for more than 500 metres (See Figure 1). Most of the shallow historical test drilling on the Lingman Lake gold zones occurred west of this fault. The detailed magnetic survey suggests that this fault cuts all the known gold zones with a right lateral displacement of 50 to 60 metres. The new magnetic survey linear targets associated with the Lingman Lake Gold zones continue eastward from this fault. This interpretation has been corroborated by the historical shallow drilling, the locations of which have only recently been established.

This is potentially a new zone which was intersected by several historical drill holes including 7.54 g/t over 0.5 metres and 6.18 g/t over 0.6 metres. These values span over a kilometre in strike length occurring along the north edge of the new magnetic survey linear target, a feature that also exists in the Lingman Mine area (Figure 1: Targets FNZ-1 and 2). Compilation of the historical drilling near the north area of the historical mine workings area is ongoing and will support test drilling of this target (located immediately north of the existing North zone).

A strong correlation of the Lingman Lake Gold zones with the edges of magnetic linears is evident, which provides for the targeting of new linear targets and potentially the discovery of new gold zones in the southeast quadrant of the map (Figure 1: FSZ-1, 2, 3, 4 and 5).

An aggressive drill program is being designed to test all the above targets along a 625-metre north-south fence.  Approximately 5-6 holes totaling 1,000 metres will be drilled in the coming weeks.

Ongoing geographic information system (“GIS”) compilation work has positioned the location of historical surface sampling including one of which assayed 6.86 g/t Au. The sample site is located 160 metres south of Base Lake and coincides with two new subparallel magnetic linear targets; the southern target correlating to a Very Low Frequency Electromagnetic (“VLF”) survey target that is over 1,000-metres in length (Figure 1: targets BL1 and BL2).  Drill testing of this area is planned for early 2022, pending further interpretive data analysis.

Extension drilling (around the clock, seven days a week) beneath the existing underground workings and historical resource down to ~250-300 metres continues on schedule and drill results will continue to be published, as they become available, from the assay lab. 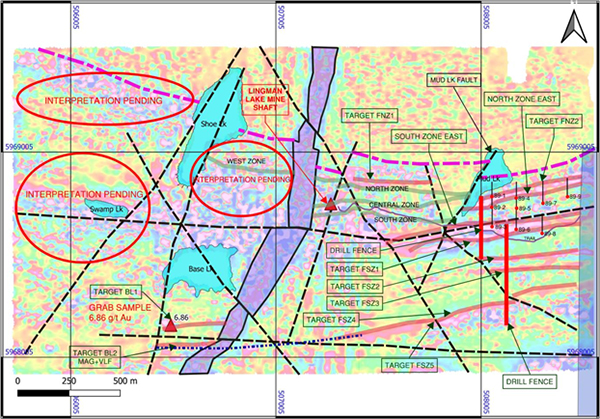 The scientific and technical content of this press release has been prepared, reviewed, and approved by Walter Hanych, P. Geo., who is a Qualified Person under NI 43-101 regulations and is a director of the Company.

The Lingman Lake gold property consists of 1,434 staked claims, four freehold fully patented claims and 14 mineral rights patented claims totaling approximately 27,113 hectares. The property hosts an historical estimate of 234,684 oz of gold* (1,063,904 tonnes grading 6.86 g/t with 2.73 gpt cut-off) and includes what has historically been referred to as the Lingman Lake Gold Mine, an underground substructure consisting of a 126.5-metre shaft, and 3-levels at 46-metres, 84-metres and 122-metres depths.

This news release contains forward-looking statements which are not statements of historical fact. Forward-looking statements include estimates and statements that describe the Company’s future plans, objectives or goals, including words to the effect that the Company or management expects a stated condition or result to occur. Forward-looking statements may be identified by such terms as “believes”, “anticipates”, “expects”, “estimates”, “may”, “could”, “would”, “will”, or “plan”. Since forward-looking statements are based on assumptions and address future events and conditions, by their very nature they involve inherent risks and uncertainties. Although these statements are based on information currently available to the Company, the Company provides no assurance that actual results will meet management’s expectations. Risks, uncertainties and other factors involved with forward-looking information could cause actual events, results, performance, prospects and opportunities to differ materially from those expressed or implied by such forward-looking information. Forward looking information in this news release includes, but is not limited to, the Company’s objectives, goals or future plans, statements, exploration results, potential mineralization, the estimation of mineral resources, exploration and mine development plans, timing of the commencement of operations and estimates of market conditions and risks associated with infectious diseases, including COVID-19. Factors that could cause actual results to differ materially from such forward-looking information include, but are not limited to changes in general economic and financial market conditions, failure to identify mineral resources, failure to convert estimated mineral resources to reserves, the inability to complete a feasibility study which recommends a production decision, the preliminary nature of metallurgical test results, delays in obtaining or failures to obtain required governmental, environmental or other project approvals, political risks, inability to fulfill the duty to accommodate First Nations and other indigenous peoples, uncertainties relating to the availability and costs of financing needed in the future, changes in equity markets, inflation, changes in exchange rates, fluctuations in commodity prices, delays in the development of projects, capital and operating costs varying significantly from estimates and the other risks involved in the mineral exploration and development industry, and those risks set out in the Company’s public documents filed on SEDAR. Although the Company believes that the assumptions and factors used in preparing the forward-looking information in this news release are reasonable, undue reliance should not be placed on such information, which only applies as of the date of this news release, and no assurance can be given that such events will occur in the disclosed time frames or at all. The Company disclaims any intention or obligation to update or revise any forward-looking information, whether as a result of new information, future events or otherwise, other than as required by law.